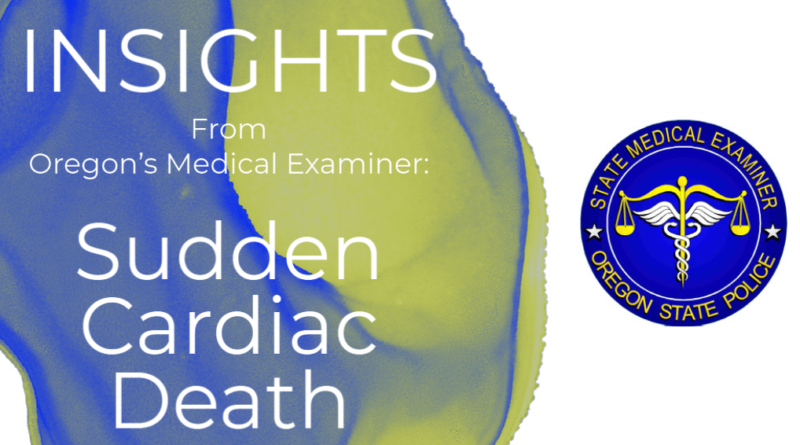 A 45-year-old man returns home from a long day at work. This individual is physically active and has routine follow-up with his doctor. He does not smoke or use illegal drugs. He is known to have a glass of wine in the evenings several times per week. He sits down for dinner with his wife and two children and plays catch with his oldest for about an hour after dinner. He then sits down on the couch and begins to doze off while watching television. He will never wake up. A few hours later, his wife notices that he has not moved and attempts to wake him. Realizing something is wrong, she calls 911. Responding paramedics attempt resuscitation but are ultimately unsuccessful. He is pronounced dead at home.

Deaths like the one described above are generally referred to county and state medical examiners. The decedent is young, healthy, and has no apparent cause of death. Here, a full death investigation commences. The decedent is transported to the Oregon State Medical Examiner’s Office in Clackamas for a full postmortem examination. However, all investigative leads – the autopsy itself, microscopic examination of the body’s organs, and toxicology testing – provide no answers. Everything is completely normal. How do we proceed from here?

The category that applies to the situation described above would be conditions that result in cardiac rhythm disturbances. Cardiac cells contain many channels that regulate the flow of ions across cell borders. The potential differences generated by this flow is what causes the heart to beat under normal circumstances:

Disorders of this type present several challenges to physicians. The dysrhythmias caused may be intermittent or precipitated by very specific factors. For example, Brugada syndrome may be unmasked by a fever. This means that the problem may not be present when the heart is monitored in a hospital or outpatient setting. Some syndromes may be associated with other abnormalities. For example, Jervell and Lange-Nielsen syndrome is associated with sensorineural hearing loss. However, channelopathies are often “occult” meaning that they are not associated with any outward abnormalities and arrythmias may be triggered without a clear cause. Contemporary medical research has identified genetic mutations that have been associated with these diseases. Definitive diagnosis in these cases requires correlation with modern genetic testing. Unfortunately, resource constraints often place this type of testing out of the reach of many medical examiners. This means that the answers that medical examiners can provide are nonspecific. It also means that the true frequency of these disorders is largely unknown.

Channelopathies present an additional layer of difficulty to medical examiners in other ways as well. These are disorders of normal physiologic functioning which cannot be detected when those physiologic functions have ceased in death. The examination of the heart in these situations is often normal, both to the naked eye and under the microscope. However, the postmortem examination is an extremely important tool in death investigations of this type. Without it, we cannot begin to consider more targeted studies that may provide necessary genetic information. Furthermore, we can procure tissue from the heart and other organs that may be useful to researchers in the future. Medical examiners offices that can perform autopsies on large percentages of deaths in the community are more likely to uncover cases like this one, which will aid in the overall understanding of these disorders. This is one of many reasons why autopsy rates are an important consideration. Autopsies allow forensic pathologists to participate more fully in public health programs and contemporary medical research, which ultimately benefits the community.

In Oregon, the State Medical Examiner’s Office has a long-standing relationship with the Sudden Unexpected Death Study, or SUDS. This is a long-term research project that aims to better define and understand the circumstances surrounding sudden cardiac death with the goal of more accurate risk stratification and intervention recommendations. It is our profound hope that studies like this one will help families obtain more definitive answers in the unexplained and unexpected deaths of loved ones.