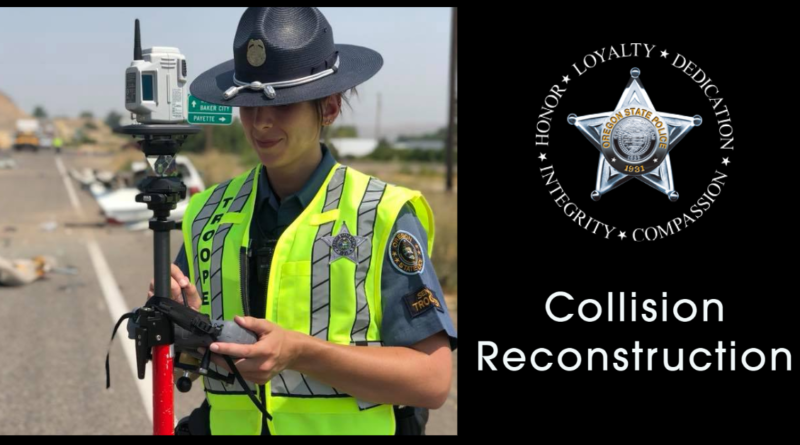 Motor vehicle traffic crashes affect us all from the inconvenience of traffic delays and minor vehicle damage to totaled vehicles, serious injuries, and at worst the tragic sudden loss of life. To prevent or reduce the occurrence of crashes and increase traffic safety for all, the Oregon State Police Patrol Division focuses on violations of law involving excessive speed, occupant safety, lane usage, impairment, and distracted driving.  But what happens when enforcement efforts aren’t enough and the crash occurs, what if the crash involves a loss of life?  For those directly involved or affected by a tragedy the questions are many, and the Oregon State Police Collision Reconstruction Unit can help provide some answers.

This specialty unit is staffed by highly trained investigators with the ability to reconstruct fatal crashes starting with documenting, collecting, and preserving evidence.  Each piece of evidence is like a puzzle piece that can be put together to see what happened and identify who is responsible.

Photographs, scene diagrams, vehicle damage, occupant injury, speed analysis, vehicle operation data, and toxicology may all be part of a thorough and complete analysis. Some complex crashes present like a 1000 piece puzzle taking more time and effort to provide solid answers to victims and their families, and for the legal system to appropriately hold violators accountable for their actions.

The unit’s technology also includes the ability and equipment to image data often contained within a vehicle’s safety restraint system, typically the airbag control module or ACM, as a result of the crash.  This data may include vehicle speed, brake application, engine RPM, steering input, throttle position, and safety belt usage in the moments before a crash, and is available on all vehicles sold in the United States since mid to late 2012, and in some vehicles as early as 1994.

During the course of the investigation, a reconstruction report is subject to a rigorous peer-review process by more experienced members of the unit to ensure the proper conclusion before the report being published.  Usually, the primary cause of the crash is determined as a violation of traffic law, such as failing to drive within a lane of travel or failing to obey a traffic control device, as well as any contributing factors to the crash such as driving under the influence of intoxicants.

The report and supporting documentation are submitted to the District Attorney’s office in the county where the fatal crash occurred for the consideration of any applicable criminal charges.  If a violator is indicted by a Grand Jury for the commission of a crime and the case goes to court, members of the unit testify impartially to the facts and conclusions of the investigation often with expert testimony as accredited reconstructionists.

In the end, the Collision Reconstruction Unit is a robust unit that strives to answer the classic questions of the “Who, What, Where, When, Why and How” of fatal motor vehicle traffic crashes. The unit is doing its part to hold the violator accountable through the legal system and hopefully assist in providing some level of closure to the families of the deceased, and speak for those no longer able to speak for themselves.