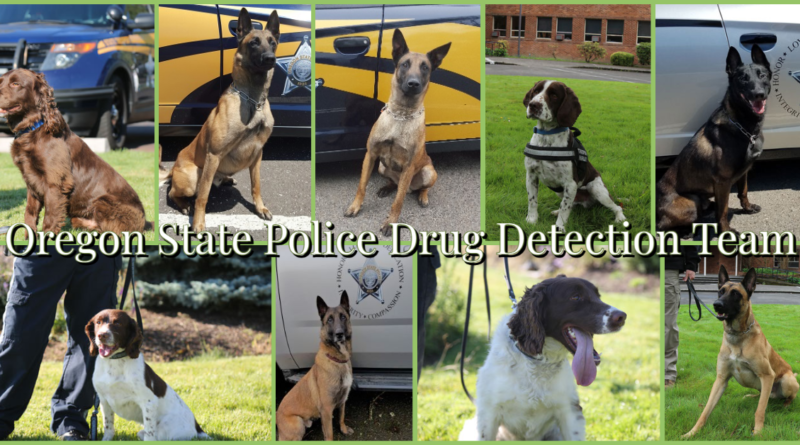 The OSP Drug Detection Canine Program was the first Canine Program with the Oregon State Police. The OSP Drug Detection Canine Program supports both the Patrol and Criminal divisions. The program started in the early ’90s with aggressive indication Labrador Retrievers. These dogs were trained to find the odors that emanate from Marijuana, Cocaine, Methamphetamine, and Heroin. When these Canine’s located the odors, they were trained to detect, they would aggressively scratch at the source of the odor.

Today’s Drug Detection Canine Program is currently staffed with nine passive indication drug detection canines. These dogs exhibit a passive indication when they detect the odors they are trained to detect. The handlers and their canine partners are staffed in every region of the state focusing on major Interstates and Highways.

Sergeant Core became a K-9 handler in 2008 and has been the Sergeant of the K-9 program since 2015. He is responsible for selecting and training all of our K-9’s and their handlers. According to Sergeant Core “Being a K-9 handler has been the most rewarding and most difficult job I have ever had. As a handler, you build a bond with your K-9 partner that is like no other. I have made amazing memories with my K-9 partners and team that I will remember for the rest of my life.”

Several breeds of canines are used in drug detection. OSP currently has; Labrador Retrievers, Belgian Malinois, and Springer Spaniels. Each of these breeds is known for their high level of the hunt and have their own unique personality traits that must be considered in the phases of training. The OSP K9 trainers have vast experience in training to create and maintain an accurate and reliable working canine.

Once a K-9 reaches the age of retirement, after approximately 5-8 years of service, they are offered as pets to their handlers. They live out the rest of their lives being loved, spoiled and cared for.

The bond between handler and canine is strong. The handlers often spend more time with their canine partners than they do with their families.  When responding to stressful calls the canines sense that extra stress and often will begin circling in their backseat kennel, whining, or even barking. While on traffic stops or other contacts, they are watching every move you make in anticipation that they will get to do their job and help. They truly love their job. The comfort the canine brings to the Trooper/Handler is often overlooked. Sometimes a paw on the shoulder through the kennel door after a stressful encounter is the little thing needed to take a breath and move on to the next call.